They met at the language course in the community center: Christine Hartmann, Reyber Hamid, Muhammad Marzaie and Annemarie Leiser (from left). Photo: Ruth Matthes  have integrated well with the help of Asyl Spenge Over many hurdles to the apprenticeship certificate 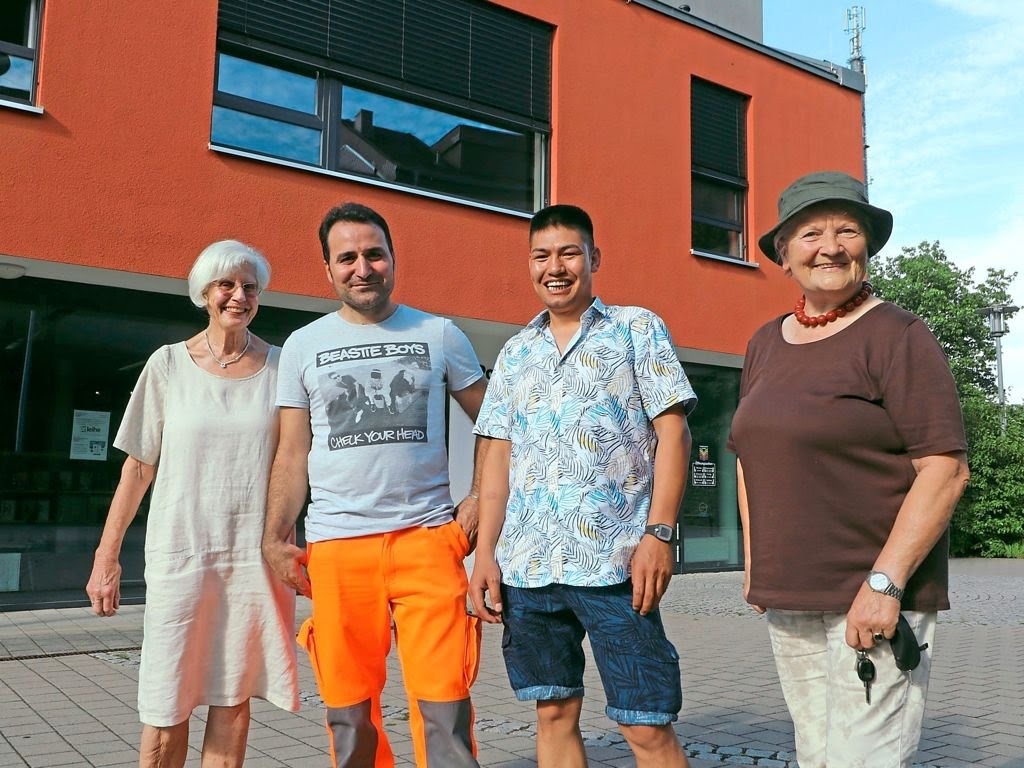 Muhammad Marzale (25) from Afghanistan and Reyber Hamid (35) from Syria have every reason to be proud. The two refugees managed to integrate successfully in Germany. Now they even have their journeyman’s certificate in their pockets. Not entirely uninvolved in this success are Christine Hartmann and Annemarie Leiser. War refugee Hamid came to Spenge in February 2014, Marzaie followed in August 2015 because he saw no prospects for himself in his politically insecure homeland. She could not attend any official German courses but wanted to learn a new language as quickly as possible.

were they glad that there was an offer from Asyl Spenge . Hartmann and Leiser, both former teachers, worked there for the refugees. We not only taught them the language twice a week, we also helped them to find their way in everyday life,” Annemarie Leiser looks back. She accompanies Muhammad Marzale, who came to Germany as a minor and has never attended school He showed unbelievable ambition and diligence to be able to earn his own money here,” she praises her protégé. This has meanwhile brought him to a permanent position at the Lammer schmidt butcher’s shop in Neuenkirchen.

In 2016 Marzaie started the language course in Herford, followed by an internship and in 2018 the first job at Lammerschmidt. After a year he received an apprenticeship offer, which he gladly accepted. As a Muslim, I was also allowed to specialize in beef and poultry. “In order to graduate, he cycled with each » You went through a lot of lows, but didn’t give up.” Annemarie Leiser dem Wetter after work from Neuenkirchen to Spenge to practice with Leiser. It was similar with Reyber Hamid, who after all already knew the Arabic alphabet when he arrived in Spenge, but I couldn’t read that quickly,” he recalls. Christine Hartmann practiced diligently with him, so that the father of a son, after overcoming various hurdles and doing jobs, was able to start an apprenticeship as a road attendant with the city of Spenge, which he has now successfully completed. He was also taken on – initially only for one year. With the training I now have good chances on the job market,” says Hamid and cramming math. I now also know at which temperature you have to use which type of road salt and how to calculate the grid stones, says Hartmann with a grin. The two of them also accompanied the young men through the exams. You went through a lot of lows during your apprenticeship, but you didn’t give up,” they praise both of them. They both need their determination in later life too. It’s still about being able to stay in Germany permanently. Reyber Hamid would have I already have the opportunity to apply for German citizenship. I just don’t have the money for that,” he says. It’s more complicated with Marzaie. He has just received permission to work in his job for two years after being granted a temporary residence permit,” explains Leiser. In the future, well-integrated young people should be entitled to lead after three years in Germany and up to the age of 27 , we look to the future with optimism.