Skip to content
A good 460 refugees are currently living in Spenge. That’s more than in 2015. For the association that takes care of people seeking asylum, this brings with it new tasks and challenges 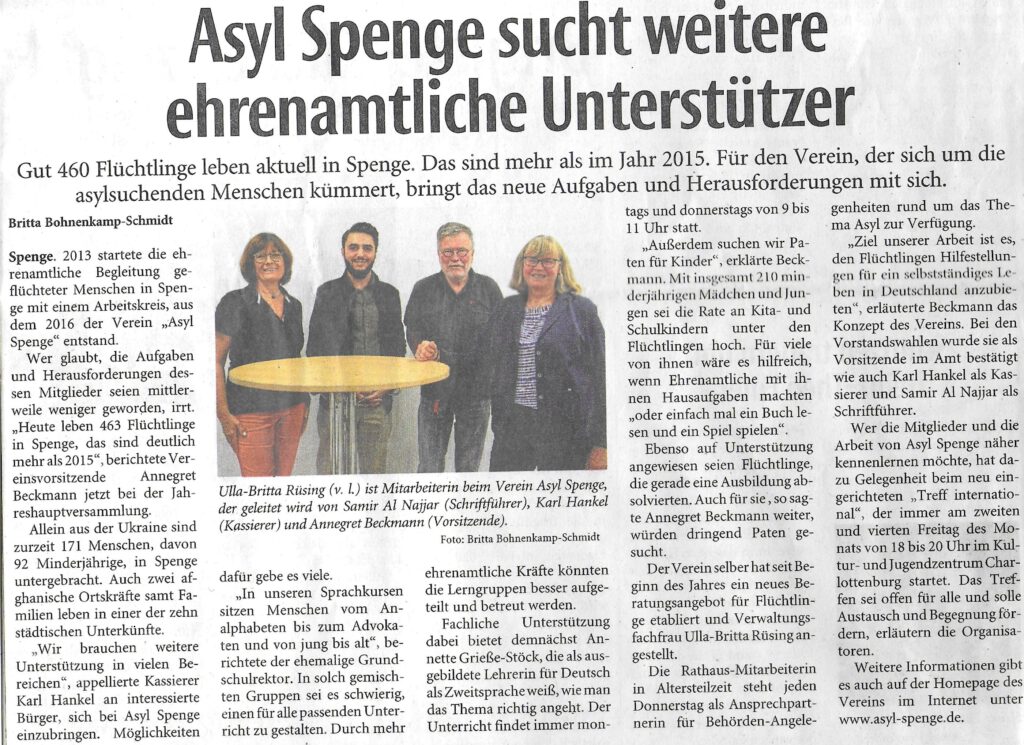 In 2013, the voluntary support of refugees in Spenge started with a working group, from which the association “Asyl Spenge” emerged in 2016. Anyone who thinks that the tasks and challenges of its members have meanwhile become fewer is wrong. “Today there are 463 refugees living in Spenge, that is significantly more than in 2015,” reported club chairwoman Annegret Beckmann at the annual general meeting. From the Ukraine alone, 171 people, including 92 minors, are currently accommodated in Spenge. Two local Afghan workers and their families also live in one of the ten municipal shelters. “We need further support in many areas,” cashier Karl Hankel appealed to interested citizens to get involved with Asylum Spenge. There are many opportunities for this. “People from illiterate to lawyers and from young to old take part in our language courses,” reported the former elementary school principal. In such mixed groups, it is difficult to design lessons that are suitable for everyone. With more volunteers, the learning groups could be better divided and supervised. Annette Grieße-Stöck, who is a qualified teacher of German as a second language, will soon be offering professional support in this regard. She knows how to approach the subject correctly. Classes are held every Monday and Thursday from 9 a.m. to 11 a.m.
“We’re also looking for sponsors for children,” explained Beckmann. With a total of 210 underage girls and boys, the number of daycare and school children among the refugees is high. For many of them, it would be helpful if volunteers could do their homework with them, “or just read a book and play a game”. Refugees who are just completing an apprenticeship are also dependent on support. Annegret Beckmann went on to say that godparents were urgently needed for her too. Since the beginning of the year, the association itself has established a new counseling service for refugees and hired administration specialist Ulla-Britta Rüsing. The town hall employee who is semi-retired is available every Thursday as a contact person for administrative matters relating to asylum confirmed her as chairperson, as did Karl Hankel as cashier and Samir Al Najjar as secretary. Anyone who would like to get to know the members and the work of Asyl Spenge better has the opportunity to do so at the newly established “Treff international”, which is always held on the second and fourth Friday of the month from 6 p.m. to 8 p.m. in the Kultur- und Jugendzentrum Charlottenburg. The organizers explain that the meeting is open to everyone and is intended to promote exchange and encounters.
Quelle: NW Zeitung
Foto und Text: Britta Bohnenkamp-Schmidt